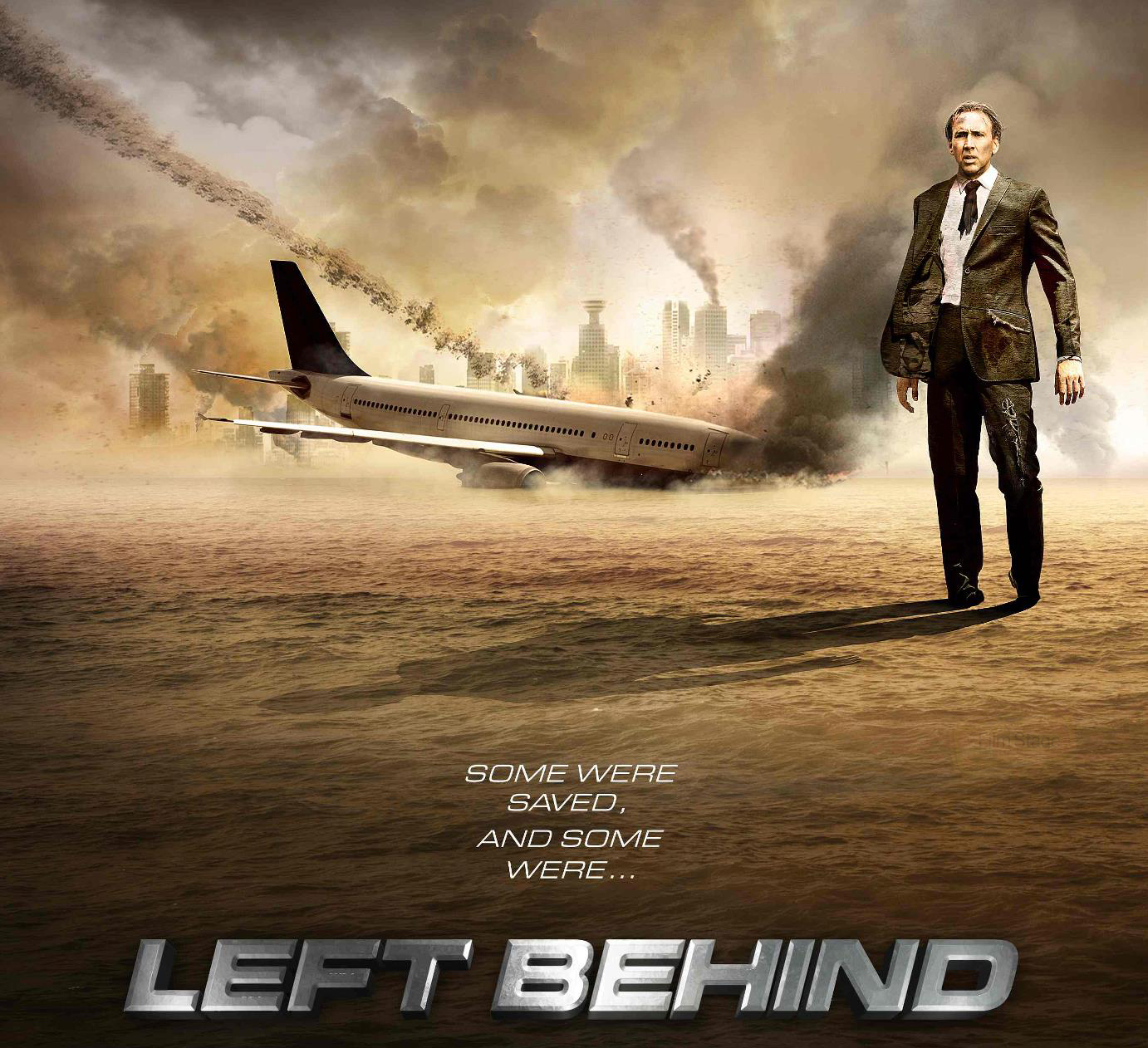 4 Reasons to Leave “Left Behind” Behind…Again

Left Behind, The End Begins, is out in theaters October 3 in which it stars Nicholas Cage. This is a remake of the Kirk Cameron 2000 version in which both films are based on worldwide bestselling books, The Left Behind series. These books, under Christian Fiction, were published in the mid 90’s. The authors, Tim LaHaye and Jerry B. Jenkins, created the series around the concept of Christian dispensationalism*  as it relates to end time events. Here are 4 reasons to skip this remake.

1. It is a waste of time. The movie runs almost two hours. That is two hours that you will never get back. Two hours that could be spent doing more constructive things with your time. With the amount of time that we are already fighting to regain is so precious, why would hand it over to theological fiction. Take that time and embellish your in personal relationships.

2. It’s a waste of money. Average movie ticket costs are $8 and if you are a going to go all out with food and drink, you need to add another $15-$20. Now a person is out close to $30 for two hours of time and money they will never get back. Not too logical. Again if we would invest back into personal relationships with people or missions, our overall satisfaction would increase. It doesn’t take much research to see that $30 goes along ways in third world countries, where the concept of movie theater attendance is not even a rational concept in their mind.

3. There is no “Secret Rapture.” The entire departure point of the series is that right before the “end of the world” God in His mercy raptures everyone that is committed to Him, including small children and babies, so they don’t have to endure the world in chaos. There is a seven year period in which the earth and those that were not raptured are going to have to live through intense trials and tribulation. During this period, the lukewarm christians that were not raptured have a second chance to get right with God before his visible second return.

While the concepts in the books and movies are based on Biblical end time events, they are taken out of context and order. Yes there is going to be a rapture. Yes the earth and it’s inhabitants are going to go through trials and tribulations. Yes there is going to be a second coming of Jesus Christ. However, the rapture and the second coming happen in sync with each other, they happen at the same time. The tribulation period happens right before Jesus’ second coming.

Rapture in the Biblical sense (the word “rapture” is never used in the Bible) simply means to be transported to Heaven. The only rapture that will take place is at the second coming of Jesus Christ.

“For this we say unto you by the word of the Lord, that we which are alive and remain unto the coming of the Lord shall not prevent them which are asleep. For the Lord himself shall descend from heaven with a shout, with the voice of the archangel, and with the trump of God: and the dead in Christ shall rise first: Then we which are alive and remain shall be caught up together with them in the clouds, to meet the Lord in the air: and so shall we ever be with the Lord” 1 Thessalonians 4: 15-17

In the context of this verse, Paul was implying that those that are “alive and remain” are those of us that have not died prior to the second coming. It doesn’t mean those of us that missed the secret rapture bus. In fact within the verse Paul is very clear that the dead raise from the grave and start ascending first and those that are alive and remain follow right behind them.

4. False Hope. In the context of the fictitious storyline, there is a partial close of probation. Again during this time those people that weren’t raptured are given a second chance to make sure they commit to God so they can go to Heaven at the Second Coming. The problem is, the Bible is very clear that when Jesus Christ comes again, the event that will have the real and one and only visible rapture, there will be no more second chances.  Think of the parable of Ten Virgins, which is a play by play story of the Second coming of Christ. Matthew 25.

How sad is going to be, people believing a lie that if they don’t get it together the first time around there will be a second chance. In other words, live like the world does, with one foot in it and the other in church, because I will eventually get to Heaven.

There will be an actual “Left Behind” and it will be those that have made the choice to not 100% surrender to Christ.

For great reading recourses on the un-Biblical and un-Theological views and belief of the secret rapture please visit these sites: