AD The Bible Continues, and So Do the Errors

AD The Bible Continues catapults itself into prime time television,airing on NBC Easter weekend.  It gains it steam from the Bible TV series on the History channel and the Son of God movie.  Despite being doomed to failure by the secular critics from the LA Times and Entertainment Weekly, it premiered with 13.1 million viewers.  Each succeeding week retaining at least 10 million viewers.  To put that in perspective 4 in 10 Americans have watched at least 1 episode. Producers Roma Downey and Mark Burnett insist that they stick to the Bible, but evidence suggests otherwise.

Judging from the previous series titled The Bible, which was riddled with inaccuracies, like the Ninja Angels.   Or when Jesus met peter for the first time alone, the Bible states that Jesus met Peter and his brother Andrew.  What about the emotional scene of the stoning of the woman caught in adultery?  In appeared that Jesus was going to stone the woman only to change his mind.  The real story in the Bible has Jesus writing the sins of those present in the sand.  There are many more examples. http://www.today.com/popculture/one-scholar-takes-issue-bible-5-things-series-got-wrong-1C9139268 http://chipvickio.blogspot.com/2013/03/whats-wrong-with-history-channels-bible_25.html http://beginningandend.com/the-bible-miniseries-hollywood-heresy/ http://jaredwellman.com/2013/03/04/the-bible-review-part-one/ http://safeguardyoursoul.com/bible-miniseries-warning-history-channel/ If AD is just a continuation of the Bible series we can expect to see some of the same Biblical errors. But when it comes to Biblical truth, is there room for creative license? AD The Bible Continues Youtube page,has interviews with America’s popular faith leaders suggesting the series is historically accurate and reliable. Take it from Rick Warren https://youtu.be/9HXcM8VEkvw?t=35s Or Pat Robertson https://youtu.be/QHk34OQtM0I?t=19s Exactly how accurately are these Bible stories being portrayed? Let’s discover some of the creative license taken. Jesus tells the disciples to cast the net on the other side of the boat, but only one man pulls in a few fish. https://youtu.be/QHk34OQtM0I?t=36s The Bible tells us in John 21:6

And he said unto them, Cast the net on the right side of the ship, and ye shall find. They cast therefore, and now they were not able to draw it for the multitude of fishes.

There are extra biblical characters, which have no mention in scripture.  Some of these include Leah (the wife of Caiaphas), Maya (Peter’s daughter), Boaz (a zealot), Reuben (head of the Temple guard), Jonathan (Leah’s brother), and others. The biggest problem with taking creative license in this way is that it undermines the validity of the Bible.  It  interjects opinion into the Holy Scriptures.  This leaves the viewer with the idea that the Bible cannot be taken as written, as Bill O’Reilly expresses in this video.There is a danger in creating super heightened emotional scenes.  In turn the non-biblical information is sealed into the minds of viewers. Keep in mind, using heightened emotions to change the mind and therefore the actions is, hypnosis 101. There is also reason to question the beliefs and intentions of the producers, namely Roma Downey. In an article from the website The Crux, the question is asked of Roma, ” Just how Catholic is the new series?”

“Downey explained that the Virgin Mary makes just one appearance in the Acts of the Apostles. In Acts 1:14, it is recorded that Mary, the mother of Jesus, is present at the foundation of the Church on the day of Pentecost. Catholic artists have always portrayed her as a central figure at the descent of the Holy Spirit. Catholic theologians extrapolate from this to affirm that one of the titles for Mary is therefore “Mother of the Church.” While it is not the brief of the film series to preach Catholic doctrine, Roma Downey said that the film is faithful to Scripture and the Blessed Virgin is not only a primary figure at the crucifixion of Jesus, but is also central on the day of Pentecost.” Downey then went on to discuss how the films are more deeply Catholic than simply making sure Mary is a key figure “The Catholic faith has always been visual. Think of the icons, stained glass windows, and the great tradition of Catholic art,” she said. “Films also capture the imagination and appeal to the emotions. As such, they go directly to the heart of people’s motivations. The door to the heart opens into the mind and motivates action.”

In an interview Roma even states that she has a devotional relationship to Mary, the mother of Jesus. https://youtu.be/oNUMRcbvVJA?t=1m20s Catholics are heralding this series as promoting catholic theology. There is a youtube channel put out the by Washington Archdiocese analyzing the series as it airs week by week and relating it to Catholic theology. https://www.youtube.com/playlist?list=PL91HXPLFFAxNWjYrYoKw_N_eAIikSpCd5 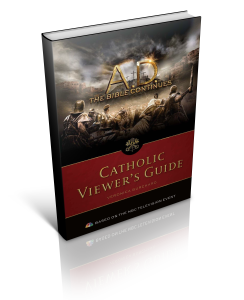 At surface level the series appears to be marketed to Evangelicals.  Yet the producers simultaneously make resource materials specially for the Catholic faith. One of these is the, Catholic Viewers Guide to AD: The Bible Continues.  The summary for episode 12 states “scripture alone is not enough to tell us everything we need to know about salvation in Jesus Christ.” Yet scripture tells us in 2 Timothy 3:15

And that from a child thou hast known the holy scriptures, which are able to make thee wise unto salvation through faith which is in Christ Jesus.

Neither is there salvation in any other: for there is none other name under heaven given among men, whereby we must be saved.

The Bible is sufficient to teach us about salvation.  Any teaching contrary is a ploy to control the minds of men. Perhaps one of the reasons that there are so many errors and extra non biblical additives is because Roma Downey’s theology is intertwined with New Age teachings as well.  Consider the following facts. 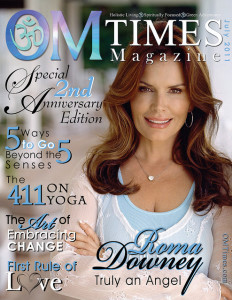 In a July 2011 interview with OM Times Roma Downey states:

“Last year I graduated with an M.A in spiritual Psychology. It was a 2 year program and the most beautiful journey of learning and heart expansion. I feel that as a result of this I am a better listener and am filled with compassion, for myself and others.”

So what does spiritual psychology teach? According to the Textbook of Transpersonal Psychology (another name for Spiritual Psychology), teachings include:

The teachings of these disciplines are in direct opposition to Christianity. Keep in mind the interview was in July 2011.  The ideas for which stories would be included in The Bible mini series started in May of that same year.  It’s plausible that her education heavily influenced the production being fresh in the mind. During past years while staring in Touched by an Angel, Roma was heavily influenced by New Thought Minister Della Reese.  Reese later married Downey and Burnett. While New Thought teaching claims that truth comes from Jesus Christ, it also teaches that true human self-hood is divine.  It also teaches ther dangerous doctrines including: the law of attraction, creative visualization and personal magnetism. In 2002 Downey went on the show Crossing Over with noted spiritualist Jonathan Edward.  Edward claimed to have contacted Roma’s mother, noting that she would be proud of what her daughter was doing. The Bible is very clear about necromancy. 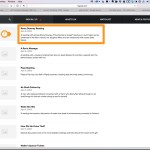 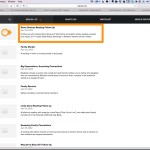 And when they shall say unto you, Seek unto them that have familiar spirits, and unto wizards that peep, and that mutter: should not a people seek unto their God? for the living to the dead? Isaiah 8:19 It also says

“For the living know that they shall die: but the dead know not any thing, neither have they any more a reward; for the memory of them is forgotten.”  Ecclesiastes 9:5

In Old Testament times people like John Edward were put to death, because of God’s clear instruction that we are not to attempt communicate with the dead. The New Testament gives some extra clarity, stating that these communications come from demons.

Now the Spirit speaketh expressly, that in the latter times some shall depart from the faith, giving heed to seducing spirits, and doctrines of devils;  1 Timothy 4:1

Later she helped Edward when he worked on his book.  Practical Praying: Using the Rosary to Enhance Your Life.  A CD on meditation featuring Roma Downey was included with the book.  This book can be found on Amazon while searching in Christian books and New Age Teachings. It is interesting to note that the production company responsible for producing the bible and AD: The Bible continues is called Light Workers Media. What is a lightworker?  According to lightworkers.org, a new age website

A Lightworker, that is a being, aware of their true presence, their inner awareness and non-dual nature then becomes a vehicle for divine activation. This role is a very simple and a natural one. When the illusionary self is dissolved into the true sense of being, the IAM presence, a being begins to shine and resonate this mandala field of pure state bliss.

This teaching seems  inline with what someone world learn in Spiritual Psychology. God chose the people He entrusted to record His sacred Word.  Can we trust people who don’t follow His Word and are heavily influenced by anti-Biblical theology to produce the Bible in a visually accurate manner? Even if they are off a little bit, the bible is clear,

To the law and to the testimony: if they speak not according to this word, it is because there is no light in them. (Isaiah 8:20)

Yet also consider these people need our prayers.  Pray that they will find the truth, and that it will set them free. Sola Scriptura