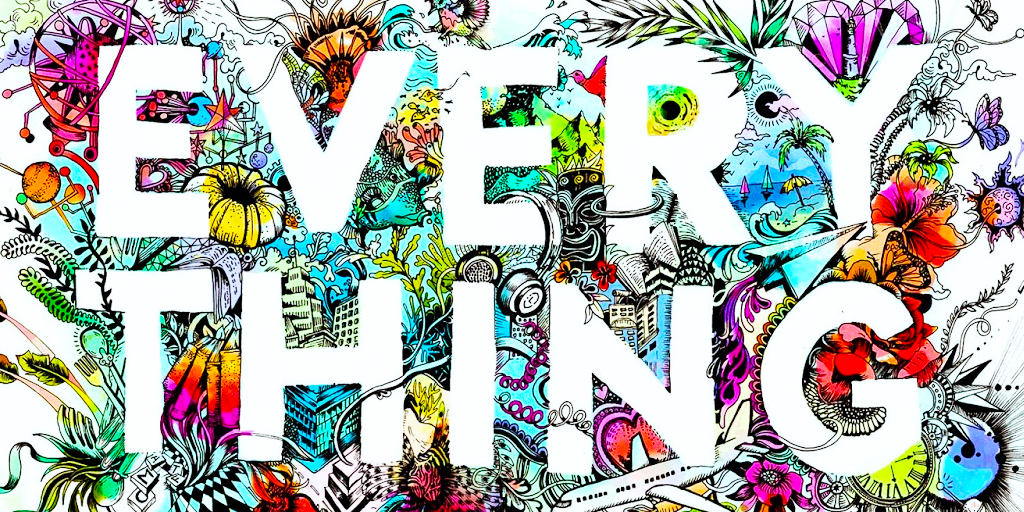 “It’s tempting to drop Everything Everything once you’ve begun . . . it’s hard not to be consumed by this tale of doomed love.” – The Times, London

As a teenage kid I was heavily into romantic comedies and movies that gave me butterflies. Oftentimes I found myself feeling in love while watching movie adaptions from Nicolas Sparks’ books, like Dear John and The Last Song. I remember vividly a movie night at the local cinema. They were playing Seventeen Again, a film which marketing centered around main actor Zac Efron. It made sense that the response to that marketing was a cinema full of girls and maybe their moms. I felt bad for that one boyfriend that was there. Not the perfect date night I suppose, when your girl is only drooling over Efron. Now they’re about to release another heart racing, blood pressure rising movie to reach the Eve’s of this world: Everything Everything.

The movie is based on a novel by Nicola Yoon. It immediately became a New York Times bestseller and got the critics elated. So what is this book all about? Of course it’s about two people falling in love, but this love story is different from any other one. Madeline is sick, very sick. As a baby she was diagnosed with Severe Combined Immunideficiency. She calls it the baby bubble disease, which basically means that she’s allergic to anything in the world. So what does her doctor mom do? She builds her a house where everything is perfect, and she can freely live. The temperature is of an ideal degree, the air of excellent quality, everything is uncontaminated, and a nurse is present 24/7. Madeline cannot go outside. If she does she’ll die. “My head would explode, or my lungs, or my heart,” she says in the novel when asked why she can’t go outside.

“The first humans ever created lived in a perfect environment with a perfect temperature, air pressure, no toxins, etc. Just like in the movie.”

Everything Everything make things seem black and white
She lives like this for seventeen years until Olly shows up. He and his family move in next door and he soon tries to steal her heart. They find all kinds of ways to communicate with each other to the unbeknownst of her mother. Then all of the sudden he shows up at her house, which kindles a full-blown infatuated relationship. She shares with him her desires to go outside where she can have fun. She even mentions: “When I talk to him I feel like I’m outside.” But wait a minute, outside means sure death, inside means staying alive. Outside means danger and imperfection. Inside means the exact opposite. It’s interesting to note that Olly only wears black clothes. We can see that in the trailer and can even find it in the novel: “He’s tall, lean, and wearing all black: black T-shirt, black jeans, black sneakers, and a black knit cap that covers his hair completely.” 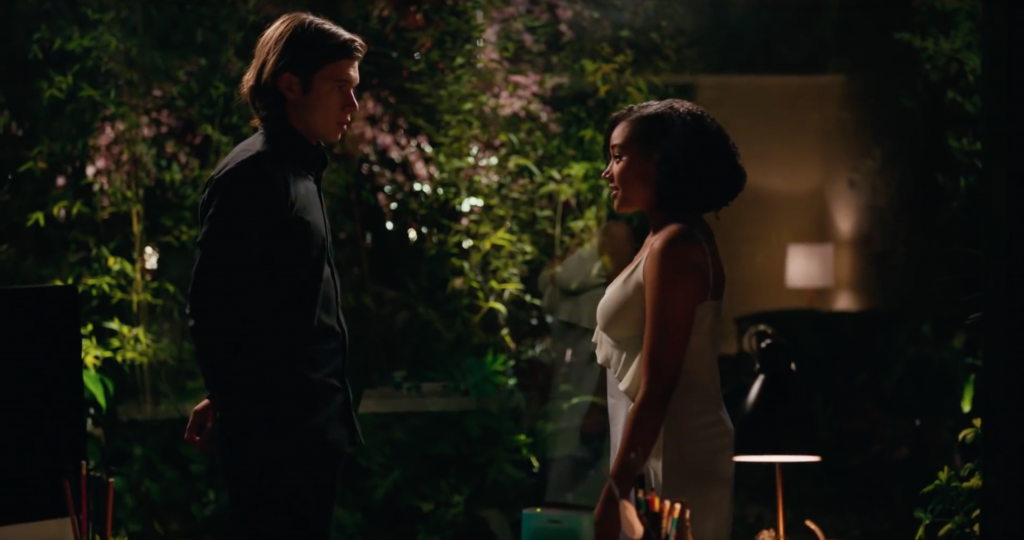 That wouldn’t be an interesting detail if Madeline would be wearing regular colors. But her house is all about white. Her clothes are mostly white, her furniture is white, the walls are white. What do we associate white with? Purity. Marketing company CoSchedule has an interesting color guide on their website. They describe white as “a color that is complete and pure, making it a perfect example of purity, innocence, cleanliness, and peace. White can also represent new beginnings, providing a blank slate, and gives refreshment for new ideas. Since white has an equal balance of all the colors, it can exemplify several meanings, with equality outweighing them all. White is a great color for simplicity, cleanliness, and idea creation; however, avoid using too much white as it can cause isolation, loneliness, and emptiness.” This is exactly how they portray Madeline and her life to be in the movie. Everything is pure and perfect and innocent. But she is actually living a life of misery, loneliness and emptiness, even though she lives in a perfect environment. Olly is supposed to set her free from that. She eventually escapes with him and together they flee to explore the world. In the trailer, Madeline writes in a letter to her mom: “I know that staying in this house keeps me alive, but this isn’t living.” A few seconds later we see her taking her first step outside, ready to explore the world that could lead to her death.

How do we interpret black? 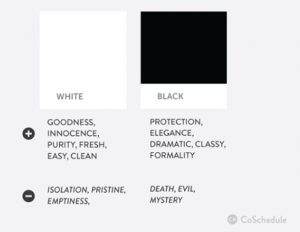 Every color provokes positive and negative emotional responses. The combination of the responses to black is very interesting in light of this story. Here’s a guy that is elegant and an attraction to Madeline–he is mysterious–while at the same time taking her outside will cause her death. The British newspaper The Times even calls their relationship a doomed love. The same term is used in the book itself by Madeline’s mother. “Doomed love is a part of your life,” she says. The Oxford dictionary defines doomed as: “Likely to have an unfortunate and inescapable outcome; ill-fated.” This love, this relationship between her and Olly can kill her.

What Madeline and Eve have in common
So let’s break this down using the Bible. There’s a perfect environment where everything is good and safe. The color white is obviously used to portray a sense of safety, purity and perfection. A quote from the book: “I look around my white room at my white couch and shelves, my white walls, all of it safe and familiar and unchanging. I think of Olly, de-contamination cold and waiting for me. He’s the opposite of all these things. He’s the opposite of all these things. He’s not safe. He’s not familiar.”

“Madeline is living a life of misery, loneliness and emptiness, even though she lives in a perfect environment.”

Olly is the one who leads her to rebel against her mother: a helicopter person who watches Madeline’s every move and tries to keep the situation under control. He leads her to leave that safe environment which can cause her death. This really sounds like what happened in the Bible with Adam and Eve. We have to look at the book of Genesis for this one. The first humans ever created lived in a perfect environment with a perfect temperature, air pressure, no toxins, etc. Just like in the movie. Then came Satan disguised as a snake and tempted Eve to step outside of this perfect world, into a world of sin. He tempted her to eat the fruit and explore a world of imperfection. He even told her: “You will not surely die” (Genesis 3:4). The New York Times’ tagline for their book review is interesting: “Even if you knew love could kill you, what would you risk to experience it — just once? Just for a little while?” Eve had love for the world, a desire to be as gods (Genesis 3:5). She wanted to experience it, even though it could kill her. God had warned her. He is like Madeline’s mother: in control of everything and wanting to keep humans safe from sin.

Perfection is portrayed as imperfect

So how does this story end? Well Madeline discovers that she’s actually not sick at all. Her mother just made up the whole story of her disease so that she can keep her inside all her life. Sounds like a pretty bad control freak to me. God is not like that, trying to keep people in slavery. He created Adam and Eve because He loved them. He wanted a relationship with them, not mere worshipping robots. That was the whole reason for putting the tree of knowledge of good and evil in the garden. He gave them a free will and let them decide whether they would be loyal to Him or not. He even had a rescue plan in case humans did not want to obey. For all those who would be repentant and would accept His infinite love, He sent His Son to be the Savior of the world (John 3:16).

Besides this movie being a bad portrayal of what godly relationships should really be like (I wrote a blog about how love is portrayed in romantic comedies. Check it out here), this movie contains some gnosticism. This is a philosophy that started in AD 2, which is all about the idea that Satan is actually good and God is bad, and what happened in the garden of Eden is good. Aren’t we seeing that in this movie as well?

God is a God of love. He wants perfection, but perfection is not evil. It is His goal for our life, but how can we ever reach perfection through God if we watch movies that teach us that perfection is actually imperfect? Rather seek those things that are imperfect and then you will be happy. This is a false theology. In an interview with Huffington Post, author Nicola Yoon says: “It’s about what it means to be alive versus living.” Is it really living to step into a world of sin? Or is it living when you allow God to live through you and bring you back to perfection, back into His image?

“Whereby are given unto us exceeding and precious promises: that by these ye might be partakers of the divine nature, having escaped the corruption that is in the world through lust.” 2 Peter 1:4