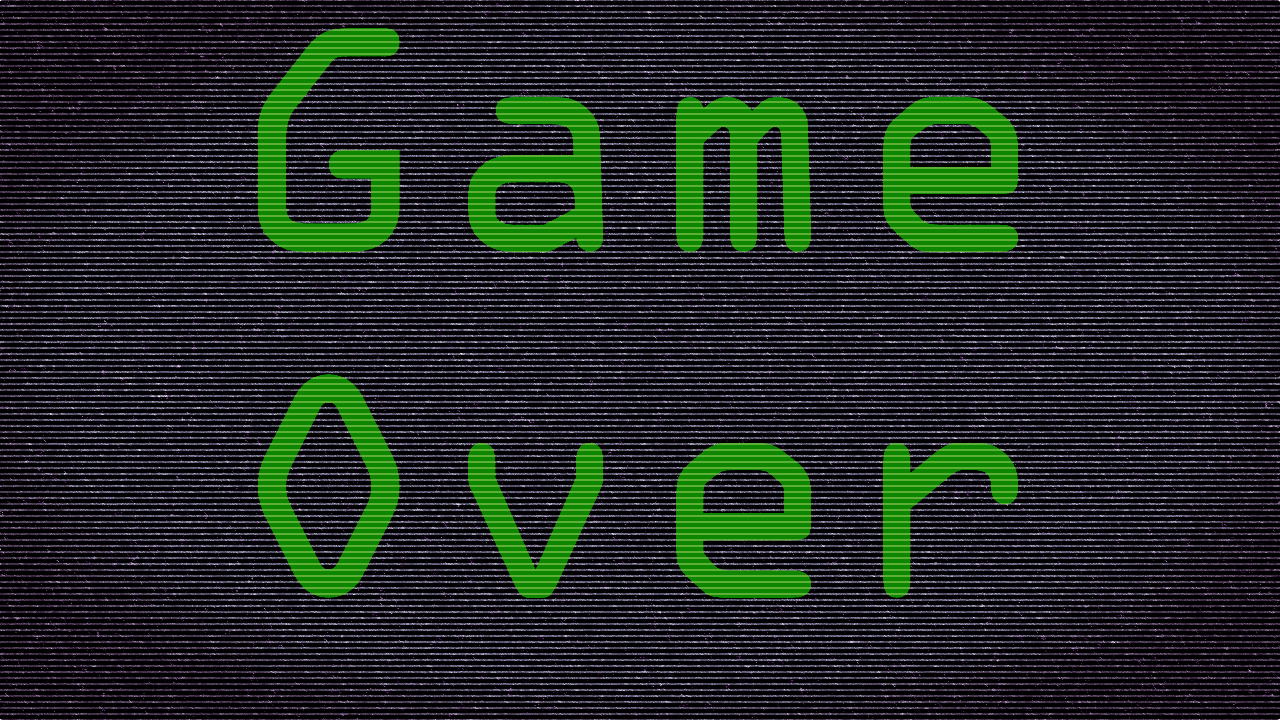 Thinking back, I must have been about 14.

But I wasn’t just angry all the time or at everything like some teenagers.  I was angry when I didn’t win, when I didn’t master the next level as I manipulated the handheld game.

It was Mortal Kombat on the Sega Game Gear platform, which is probably telling my age.

Why couldn’t I win?  I didn’t understand it, I seemed to be doing all the right things!  But as I threw the console down in anger, I had lost more than the game.  I lost all self control.

One of my other brothers had a similar experience, if not all three of us.  Eventually our parents recognized the anger issues and took the games away.

I don’t know how many parents would do the same thing today or how many are paying attention to their children’s behavior while they play these games.  What I do know is that video games have not gone away.  There are more games, and more players.

Recently I was intrigued as  I came across a trailer for a documentary about video games.  It’s called Video Games: The Movie.

The things that are brought out are simply amazing.

Consider these lines from the trailer with their time code. (Some are visual, some are audible)

1:05 there’s just something about blowing your friend in half, nothing is more satisfying

1:30 Video games In the next 30-40 years are going to be unimaginable, where you can live the dream that you always wanted to live.

As I think about the first two lines, I think about how wrapped up I’ve even been in a game, it becomes a type of reality to you.  Now I knew it wasn’t real.  But there are moments when it’s easy to lose yourself because of intense focus on the screen before you.  It becomes more than just a game.

The reach that these games have into the lives of people now is truly staggering.  You don’t have to go to the arcade anymore, you can bring your console home and play there.  It’s similar to the way movies are, they started out in just the theatre, but now you can download them from the internet through a little box without ever leaving your house.

I can’t speak for the documentary maker, so I wont.  But I wonder what the man meant when he said, “It’s a borderline religious experience”.  I suppose it depends on what religion is to that individual.  Still even without frame of reference, religion is by definition at least thinking about something to worship or a divine being.  Video game creators are there to help you out, but putting religious themes and symbolism into their games.

So I can see all that, but then it hit me.  The next line.

“There’s just something about blowing your friend in half, nothing is more satisfying.”

Now, he’s not really killing his friend, but why would the glorification of this violence be satisfying?  And someone that says that, I don’t really believe wants to kill his friend.  But what’s troubling is that he finds the simulation pleasurable.   To me it was creepy, and I don’t think I’m the only one that would be creeped out by the kind of statement.

And then it’s capped off with the line

“Video games In the next 30-40 years are going to be unimaginable, where you can live the dream that you always wanted to live.”

If my dreams include blowing my friend in half, I think I’m having nightmares.

But it made me start thinking about game ratings.  I know they are rated but what do the ratings mean?  Who buys the games?  What games sell well.  There are rules and regulations out there to protect at least young impressionable minds before they get to the age where they can play these things right?

It’s true, and polls show that over 80% of parents are aware of the ratings, know what they mean and use them for evaluation purposes.  Hey, there’s even an app for that!

What I found out was surprising, through it probably shouldn’t have been.

But the top 10 selling video games that year, 5 of them were rated mature including the #1 seller Bioshock Infinite.   Maybe that is not a trend, but so far in 2014 the numbers are similar.  So far this year, mature games took 12% of the market and 5 out of 10 were rated mature.  Once again the #1 selling game Titan fall had a mature rating.

Ok, so just what does that mature rating mean? 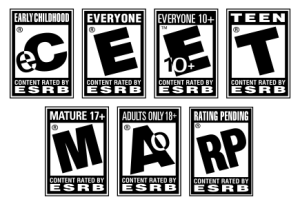 According to the ESRB

Content is generally suitable for ages 17 and up. May contain intense violence, blood and gore, sexual content and/or strong language.

And those unsettling elements you see above are defined.

Strong Language – Explicit and/or frequent use of profanity

That’s what’s selling!  At least half of what’s selling.  It’s astounding considering the small percentage of games that are released under that rating.

Now a lot of people playing these games are older, after all the average gamer is 30 years old.  And they started about 13 years ago, making them 17 when they started.  But keep in mind that is averages.  The average age of a gamer has been coming down in recent years because an increasing amount of young people are finding their way to games through these handheld devices we carrying around in our pockets and communicate with our friends and family on, yes smart phones.

My parents never played video games with us.  That’s not the trend these days though.  Parents are paying attention to what their kids play and most of them think that it’s a positive part of their child’s life.

Why do parents play with their kids?

3 It’s a good opportunity to socialize with their child: 75%4

5 They enjoy playing video games as much as their child does: 47%

While I’m glad parents want to play a positive role in their child’s life.  I have some concerns.

2.  The kids who are trying to buy mature rated games, aren’t really under age the way you might think.  If you’re 16 and you want to buy an M rated game, it’s not illegal, it’s against store policy.  The reason it’s against store policy is because the store doesn’t want to look bad because it’s frowned upon by society.  But there is nothing legally preventing them from doing so.

3.  What’s the trend?  If younger and younger kids are playing games and a good portion of the sales are for games that promote violence, blood, gore, sexuality and strong language the numbers say a lot of gamers will gravitate to buying those types of games as they get older.

4.  Parents are now an accomplice.  Maybe that isn’t troubling.  After all most of the people who play the games are just having fun and are not harmful to society.   But video games are ok with mom and pop, then it doesn’t really make people stop and think twice as they get older to steer clear from questionable content even they were raised with those things absent from their home.

5.  I think the stats are skewed.  I played years ago, and I wasn’t 30.  I think the outliers are shifting the norm.  I wasn’t the only one who played in my circle of friend when I was young either.  I knew lots of people who played that were around my age.  I liken mature games to alcohol.  Just because you may be too young to buy it, doesn’t mean you don’t have access to it.  It’s easy enough to get from an older sibling or friend who is old enough. 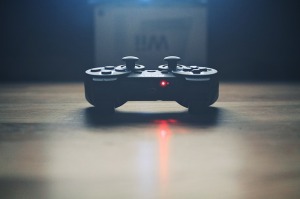 Statistics are nice, but they don’t always tell the whole story and you can warp them to prove your own agenda.

However, I don’t need them.  I have something better.  I have a Bible.

My Bible tells me that I’ll be changed into the image of God, if I behold the glory of the Lord.  (2 Corinthians 3:18)

To reinforce that point, the Bible says that if I’m a hearer of the word and not a doer,  I’m like a man looking at my reflection in the mirror.  That man forgets what kind of man he is.  It says that man is deceived.  (James 1:22-24)

I can know what the Bible says.  I can know I should be just, love mercy and to walk humbly with God.  But if I don’t,  I deceive myself.  And when I look in the spiritual mirror,  what I see staring back at me is what I will be like.  I will be like me.  I will behold self and become selfish.

God says that my thoughts are important, they are a reflection of what I think and who I am.  If it’s in my heart than I am that way.   (Proverbs 23:7)  He says that the wicked run to evil and are quick to shed blood.  (Proverbs 1:16)

If Christ says that when I look at a woman with lust in my heart I have committed adultery, what does it mean when I play a video game with the intent to blow my friend in half?  Sure I may never really do that in real life, but then again I may never cheat on my wife either.  It doesn’t make me any less guilty.  (Matthew 5:28)

I don’t get angry like I used to, I’ve matured.  And I still have some maturing to do.  But I don’t think I’ll find the answer to maturity in mature games.

By the numbers it’s people my age buying all the mature games.

If I promote mature games by my playing them.  But then I turn around and teach them different values than what is portrayed in the games?