Few people have reached the level of fame as pop icons do in the 21st century. Fans from around the world worship and idolize these individuals, but it most often comes at a severe price. It seems the higher one climbs up the fame ladder, the more bizarre they become. One such celebrity is Lady Gaga and she is by no means a stranger to self indulgence. She was born Stefani Joanne Angelina Germanotta on March 28, 1986 in Manhattan, New York. She attended a Catholic school called the Convent of the Sacred Heart. A school with a heavy price tag to attend.

She was bullied and thus found her escape in music. By age 14 she was performing at open mic nights in clubs and bars. At age 17 she gained an early admission to the New York’s University Tisch School of Arts; shortly thereafter landing a music deal with Def Jam records that went belly up after just 3 months. She returned home and immersed herself in emerging neo-burlesque shows and go-go dancing bars dressed in nothing more than a bikini while experimenting with drugs. She continued to push the envelope with her performances and her friends began to call her Gaga after Queen’s song titled Radio Ga Ga. Queen’s wacky music video for that song had a lot of Satanic imagery taken from the 1927 movie Metropolis. 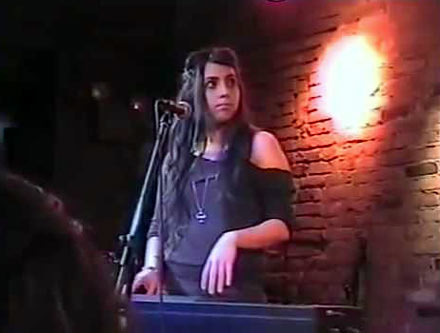 In 2007 she landed a songwriting deal with Streamline Records, an imprint of Interscope Records. She wrote songs for Britney Spears, New Kids on the Block, Fergie, and The Pussycat Dolls. While singing a reference vocal for one of the songs she wrote, one of the music producers convinced Interscope chairman and CEO Jimmy Lovine to sign her. The rest is history.

Lady Gaga’s debut album won multiple awards selling millions of copies while her world wide tour became the highest grossing music tour of all time. Her fame fueled her outlandish behavior and sparked her often controversial outfits and performances. Lady Gaga began to label her ever growing world wide fan base as ‘little monsters’.  She celebrated the outcasts and often encouraged them to embrace their darkest desires.

According to dictionary.com the definition of a monster is “one who deviates from normal or acceptable behavior or character”. Also “a person of unnatural or extreme ugliness, deformity, wickedness, or cruelty.”

This name is an appropriately ascribed to her followers due to Lady Gaga’s promotion of “do what thou wilt” philosophy.  In an interview with VEVO, Lady Gaga claims that her music is “designed to create in you an adrenaline rush”.  She goes on to say when you see her in concert, the music show will so engulf you that you will feel like you are on a different planet.  In short, its designed to suck you into her world view and make you sympathize with the messages of her songs.  As she describes her relationship to her fans she goes onto say that her fans understand her and what she stands for.  They are just as rebellious as she is.

Lady Gaga’s music is meant to affect everyone that watches her perform.

The Bible warns us against rebellion. It says in 1 Samuel 15:23 that “rebellion is as the sin of witchcraft”.

The out of this world imagery seen in her shows seems to be aiming its rebellious attack against the very Creator of the universe.

Her music videos are often chuck full of blasphemous visuals and overtly Satanic themes. Everything, from black wedding dresses to getting vomited on while singing, to pouring fake blood all over herself during her acts. 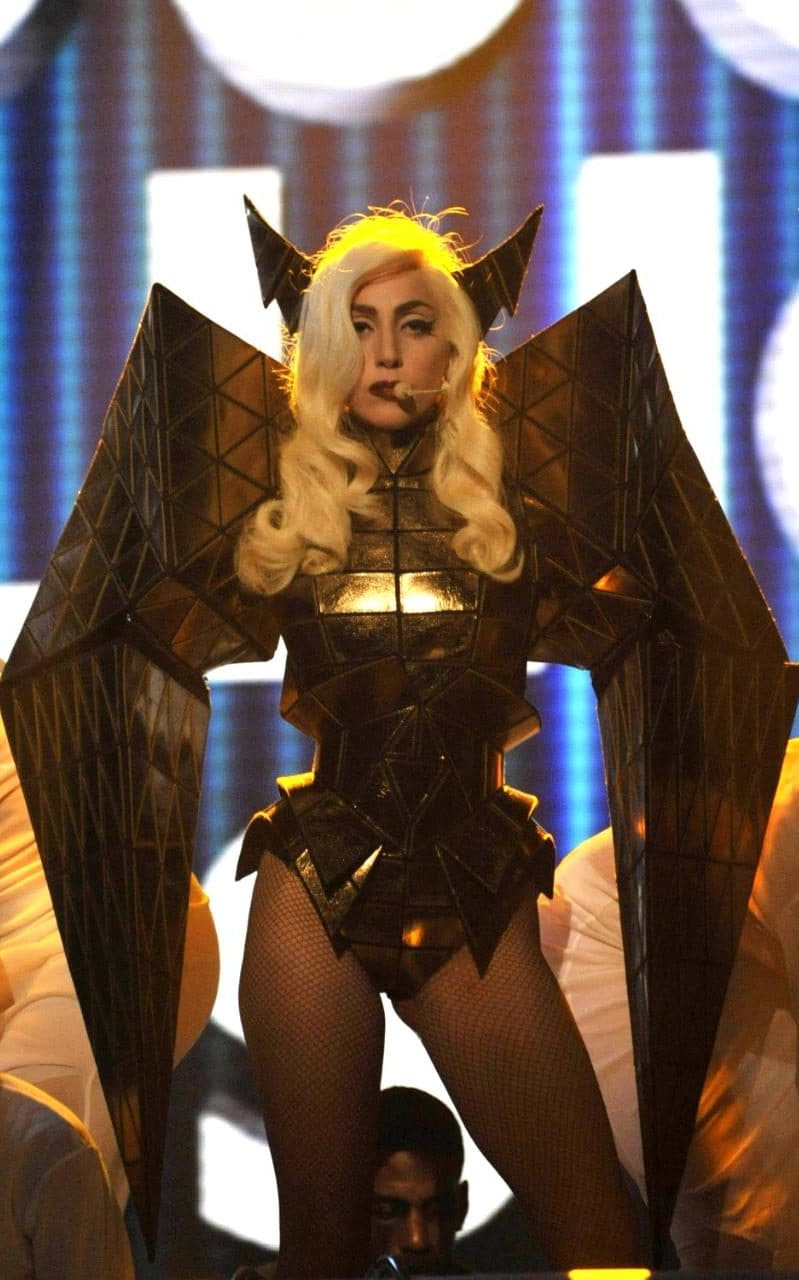 Take for example her music video titled Judas. In the video we see Lady Gaga on the back of Jesus’ motorcycle.  All the other riders are named the same as the apostles. Then she notices Judas. As the song progresses she sings about her love for Judas and not for Jesus. There is a scene were Lady Gaga is in a bathtub with Jesus and Judas and she is washing Jesus’ feet but then turns her affections to Judas. The satanic imagery does not stop with only one music video.  She has crosses sewn into her outfits, built into her stages, and has an array of occult messages.

Perhaps one of the contributing factors to her sudden extreme fame is her shock value, but even more shocking is who she actually contributes her fame to. In a documentary that HBO put out about the rise of Lady Gaga’s fame, the question was asked “how did you [Lady Gaga] get so famous?” Lady Gaga replied “It was God that created my fame, it was for sure Jesus”.

She is certainly not shy about shy about telling the world she believes in God. She even claims to follow Jesus. In fact, she considers herself to be a very religious person, even often praying with the entire cast before each show.

In an interview with Larry King he asks her if she believes in God. She replies yes. Then she makes a statement that she believes she is going to heaven when she dies but the possiblilty of her going to hell is just the same. Lady Gaga appears to be very loving towards her fans. She contributes incredible amounts of money to various charities and humanitarian causes. She is very sympathetic when it comes to social issues. But the problem lies in what kind of messages her art conveys. We can only judge someone by their fruits.

Even though she may claim to follow Jesus and have a belief in God, her actions tell a very different story. The Bible has something to say about such behavior.  It says “if you love me, keep my commandments.” John 14:15

What are God’s commandments?

Barbra Walters asked Lady Gaga in an interview if she was bisexual. Lady Gaga replied that even though she had only been in love with men, she certainly had many sexual relations with women.

You see, the Bible says in Jeremiah 25:5 to “turn ye again now every one from his evil way, and from the evil of your doings”. It’s one thing to say you are a follower of Christ, but if you are a true follower you must do what He asks of us in His holy Word.  Even the devil believes in Christ, but he does not do what God asks.

We will know them by their fruits right?  If our words and actions do not match, then we have a problem. When the Bible condemns certain behavior, yet we choose to do those things which it directly speaks against, then it is called sin.

We are not called to embrace the darkness but to walk in the light.

“Therefore lay aside all filthiness and overflow of wickedness, and receive with meekness the implanted word, which is able to save your souls. But be doers of the word, and not hearers only, deceiving yourselves. For if anyone is a hearer of the word and not a doer, he is like a man observing his natural face in a mirror;  for he observes himself, goes away, and immediately forgets what kind of man he was. But he who looks into the perfect law of liberty and continues in it, and is not a forgetful hearer but a doer of the work, this one will be blessed in what he does.” James 1:22-25

God is wanting to lead us away from our sinful propensities. Not just an intellectual connection but a real heart change.

During each concert on her “monster ball tour”, Lady Gaga was clear about the one thing she hates. She says “I hate the truth, in fact, I hate the truth so much, I’d rather have a giant dose of (BEEP) over the truth”. 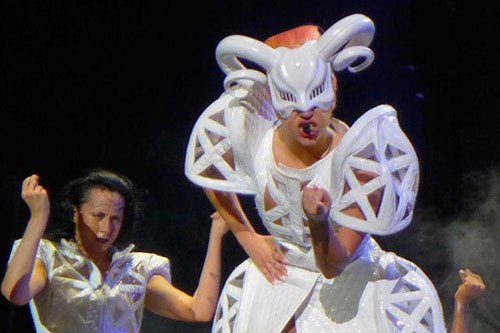 “I am the way, the truth, and the life. No one comes to the Father except through Me.”

So by saying that she hates the truth, she essentially hates Jesus (because he is the very definition of truth).

“If anyone among you thinks he is religious, and does not bridle his tongue but deceives his own heart, this one’s religion is useless.”

Jesus’ whole mission on this earth was to preach “repentance and remission of sins” and that if we ask for forgiveness and turn from our evil ways He is faithful to forgive us.

But Lady Gaga seems to make fun of Jesus’ mission in the most blasphemous ways. In the song titled Judas she sings these words

“In the most Biblical sense,
I am beyond repentance
Fame hooker, prostitute wench, vomits her mind.”

Some say its all just an act, that she does this just for the fame. But yet her personal life confirms the suspicion.  All of the demonic imagery seems to be spilling over into her offstage life. Many reports have come out that Lady Gaga can’t sleep at night. Her closest friend and personal assistant is suing the star for 400,000 dollars in unpaid overtime. She claims that Lady Gaga can’t sleep alone and that she forced her to sleep in her bed every night, because she was haunted by demons. 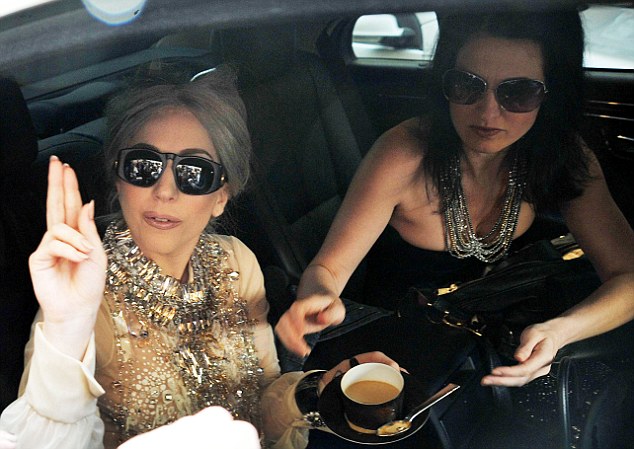 There have been reports that Lady Gaga has a spirit named Ryan that haunts her. She even held a seance to try to communicate with the spirit and see what it wants. She apparently spent 47,000 dollars on state of the art electromagnetic field meters to detect spirits. There are reports of freaky behavior such as bathing in blood during a hotel stay in England.

Whether or not you think this is just ‘art’, you have to realize that all art is meant to affect the viewer. Make no mistake, this music has a profound effect upon its fans. As a true follower of Christ we must learn how to take Him at His Word. Our actions as Christians must match the messages that the Holy Spirit is relaying in the Bible.

Pray for Lady Gaga. If she has been raised with a faith in God, pray that the Holy Spirit can penetrate her heart. Even though she thinks she is beyond repentance-as she sings in her song Judas-no soul is too far out of reach for God.  And secondly, pray for all the souls who will be influenced into all manners of evil, because of Lady Gaga’s art.