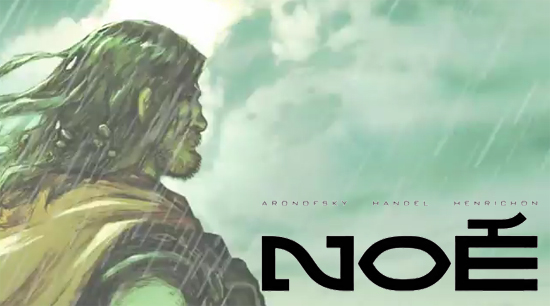 Noah: Swept Away by a Flood of Lies

Noah, the story of one of the most epic biblical figures is about to wash ashore to a theater near you. It’s set to be full of action, drama, and suspense.
But the one thing it will not be is biblical.

Let’s explore a few facts about the soon to be released cinematic narrative.

The Noah movie is NOT based on the Bible. While that may seem repetitious, it’s written in the most literal sense. The film is based on a graphic novel written by Darren Aronofsky and Ari Handel. [1]  The novel is written in French. A preview of it in video format and synopsis was made public by the publisher. The following is a translation into English of that synopsis.

It was a world without hope, a world with no rain and no crops, dominated by warlords and their barbarian hordes. In this cruel world, Noah was a good man. Seasoned fighter, mage and healer but he only wanted peace for him and his family. Yet every night, Noah was beset by visions of an endless flood, symbolizing the destruction of all life. Gradually, he began to understand the message sent him by the Creator. He had decided to punish the men and kill them until the last. But he gave Noah a last chance to preserve life on Earth…

Aronofsky also summaries in his own words. [2]

It’s a really cool project and I think it’s really timely because it’s about environmental apocalypse which is the biggest theme, for me, right now for what’s going on on this planet. So I think it’s got these big, big themes that connect with us. Noah was the first environmentalist.

For the director, this film is a chance to tell the world about how our current environment is being treated and to draw the parallel that we are also on the verge of environmental apocalypse. Bluntly put, his primary concern is not bringing out the fine details of the Sacred Writ.

The director is not a Christian. Automatically this would not disqualify him from making accurate representation of a historical account, however it can introduce bias.  Aronofsky is a Ukrainian Jew and a Harvard graduate in film studies. [3] It is with that background that the following quote stems from an interview of the directors past films revealing his intentions when creating a movie.

Ruby: You know, a lot of filmmakers seem to be either very literary-based or else very movie-based who just watch movies. You seem to really be developing this new visual style that suits each story. You know, how did you find this third road?

DA: It’s probably because I’m godless. And so I’ve had to make my god, and my god is narrative film making, which is — ultimately what my god becomes, which is what my mantra becomes, is the theme. [4]

If you put that quote into the context of Noah, it’s really environmentalism that becomes his god. 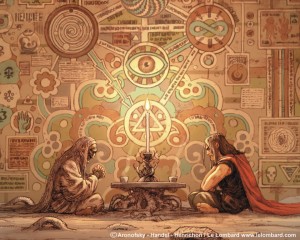 Noah builds the ark with wood from a magical forest, which is planted with a magical seed given him by his grandfather, Methuselah. The deviation from the accurate account in the Bible stems from the viewpoint of the graphic novel. The script is written describing the earth as a desolate waste land.  If there is no rain, and no crops, it would make building an ark rather difficult. Where does one get the wood?  Enter the magical seed.  Painting Noah as an environmentalist does bring up an interesting conflict of interest in chopping down a whole forest. But given its mystical origins perhaps it’s a moot point?

Demons help Noah build the ark.  While that is a fantastic statement it gains clarity as more the truth comes to light.  To illuminate the subject, we must look at the first few verses of Genesis 6.

And it came to pass, when men began to multiply on the face of the earth, and daughters were born unto them, That the sons of God saw the daughters of men that they were fair; and they took them wives of all which they chose. And the LORD said, My spirit shall not always strive with man, for that he also is flesh: yet his days shall be an hundred and twenty years. There were giants in the earth in those days; and also after that, when the sons of God came in unto the daughters of men, and they bare children to them, the same became mighty men which were of old, men of renown. And GOD saw that the wickedness of man was great in the earth, and that every imagination of the thoughts of his heart was only evil continually. Genesis 6:1-5 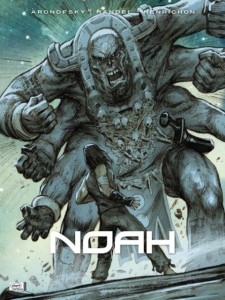 Most Protestants interpret this passage when it speaks of the giants as the offspring of fallen angels and women. Fallen angels are also known as demons.  The reasoning behind this comes from the meaning of the word giants in Hebrew. The strongs concordance entry for this word is 5303 nphiyl, meaning bully or tyrant. It comes from the root 5307 naphal, to fall.  There is nothing in the original language or the translated text to implicate angels as being the “Sons of God”.  This is an extrapolation of other texts.  One such text is the book of Enoch.  This book calls these beings the Watchers and is where Aronofsky derives his term for the angel/demons of Noah. [5] [6]

Where he deviates from the book of Enoch, and the belief of most Protestants is that in Noah, the Watchers are not half bred angel men. They are just the fallen angels, and what are fallen angels?  Demons.  And it’s these creatures that assist Noah in the great feat set before him.

Noah and his family are not the only ones who make it on the ark.  The Word of God points out that it was only Noah and his family that were saved alive (Genesis 7:13). To emphasize the point of the Bible everyone else died. The contrast is purposeful in denoting the extreme change in population (Genesis 7:21-23). Prevalent in Noah is an antagonist, Akkad, whose goal it is to kill all the men on the ark and rape the women repopulating the earth. I can understand creatively license in the personification of evil.  However, God’s point in His Word is that evil is personified in all of humanity, not just one guy. [7] 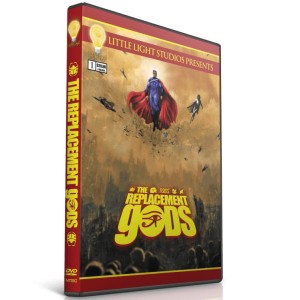 Noah is portrayed as more loving than God.  As if derivation of the Bible wasn’t enough, the director has decided to delve into gnosticism as well. While the film indicates that Noah is impressed in dreams the flood is coming and that God will destroy all life, one motif that is less prevalent is the fact that Noah is impressed with the idea that after the flood, life will not propagate further.  Hence, he and his family will die out and there is to be no repopulation of the antediluvian world. However, the environment-loving Noah becomes faced with a dilemma. His daughter-in-law is pregnant. Noah deduces that if the child is a boy it can live, but if a girl it cannot.  It turns out that she is pregnant with two girls.  When it comes to the point of carrying out what he believes is the Creators will protecting the animals and earth from evil humanity, Noah tells God that he just can’t bring himself to do it.  He cannot slay the girls. Such a cruel picture of God is projected.  You can learn more about the gnostic teachings of Hollywood in the documentary Replacment gODS.

There are a couple of more items that should be brought out indicating how the film strays from the Bible. In the trailer, it can be seen that Noah is hurling spears at the people outside the ark, while it is raining. God’s Word tells us that Noah and his family enter the ark and it doesn’t rain for 7 days.  They don’t come out.  It rains after that time, so Noah wasn’t outside throwing anything at anyone.  This adds to another point that seems to be absent from the whole script and bits and pieces that are known, Noah preaching and caring about the souls of those on the earth.  You have to be pretty at odds with people to throw spears at them to keep them off the ark.  But the Bible tells us that Noah was a preacher of righteousness for 120 years. (2 Peter 2:5) This was a work of patience and caring. It was a work that demonstrated the love of God for humanity to warn and bear with them for a long period of time.

Having got a chance to read an updated version of the script for Noah I want to warn you. If you were expecting a biblically faithful retelling of the story of the greatest mariner in history and a tale of redemption and obedience to God you’ll be sorely disappointed.

The bottom line, if you want the truth, read the Bible.