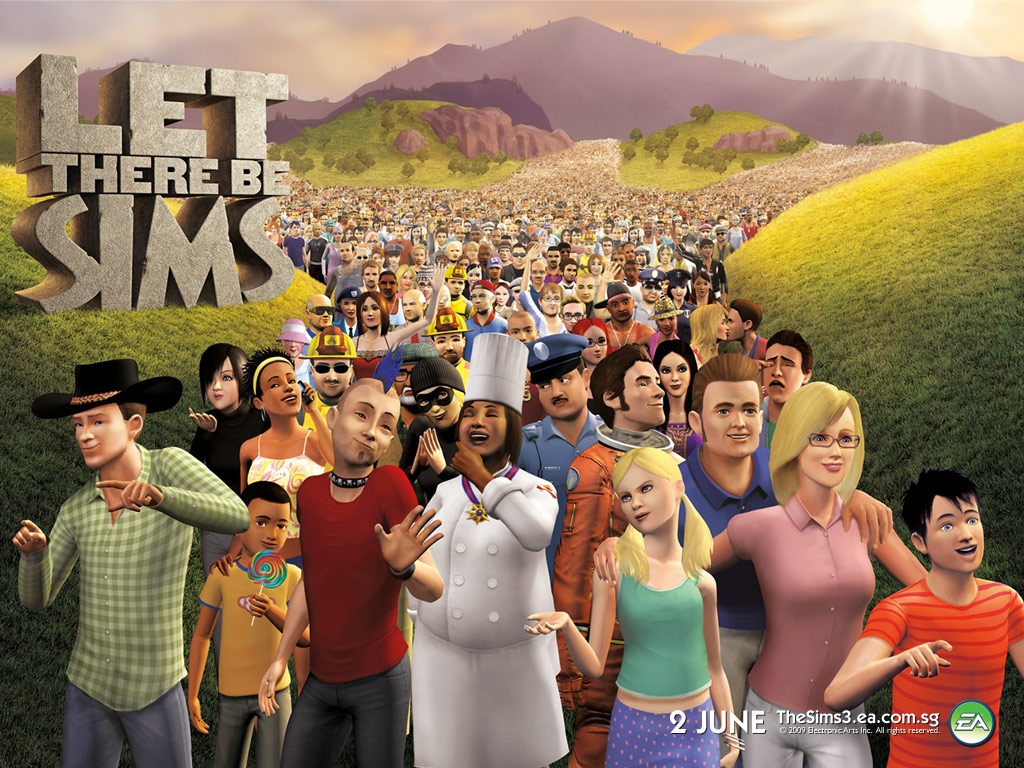 The Sims: Play with life and do what thou wilt

Ever since Maxis started with the first The Sims game in the year 2000, it was a hit. Millions of copies were sold, especially among teenage girls. With the ability to influence millions of girls in their puberty, is it possible that these girls don’t play with life, as the slogan intends, but that a darker force plays with them?

“Best selling game of all time”, “biggest selling PC game ‘franchise’ ever” and “game of the year”. With statements like these The Sims has found its way into many homes and is accepted by many parents as a cute game that teaches their children about life in all aspects. But the game’s slogan ‘Play with life’ reveals the motive of the designers. Blogger Zorine Te writes on Gamespot: “Life’s possibilities are endless. By extension, a game series intending to simulate life would also hope to have endless possibilities. The Sims series has attempted to encompass this.”

No rules, no limits
The Sims is soaked in the ‘Do what thou wilt’ philosophy by Satanist Aleister Crowley, whose nickname was the Beast to refer to his evilness. There are no limits. Even killing your Sims is possible in the game. Just like Disney, The Sims is covered with a sugarcoated layer. It seems innocent, but there is a lot to be discovered once you analyze it with the Word of God.

Homosexuality
Homosexuality can be traced back all the way to the first The Sims game. Before we show how The Sims is promoting same sex marriage in the game and through its trailers, it is important to understand that God condemns homosexuality just as much as any other sin.|

“Do you not know that the unrighteous will not inherit the kingdom of God? Do not be deceived. Neither fornicators, nor idolaters, nor adulterers, nor homosexuals, nor sodomites, 10 nor thieves, nor covetous, nor drunkards, nor revilers, nor extortioners will inherit the kingdom of God. 11 And such were some of you. But you were washed, but you were sanctified, but you were justified in the name of the Lord Jesus and by the Spirit of our God.” 1 Corinthians 6:9-11

In this verse homosexuality is among all other sins one might be struggling with. Besides that, straight men struggle just as much with sexuality as homosexuals, but then for example with pornography. God does not hate homosexuals. He loves the sinner, but hates sin, so He has given His Son to die for us to enable us to overcome that sin through His strength. It is just that homosexuality is promoted in this game, that we are revealing it. So let’s analyze this.

Same-sex relationships were possible in The Sims 1, but they could only live together. Marriage was not possible and there was no pre-made same-sex couple that the designers had added to the game. Currently there is one pre-made same-sex couple in The Sims series and several other Sims are implied to be gay or lesbian in their biographies. When the free will option for the Sims you created is turned on and you yourself don’t rule them anymore, they are implied to become lesbian or gay.

According to The Sims Wikia, every Sim is technically bisexual. Now your Sims can have a crush on, make out with other sims, date, WooHoo (sex), fall in love with and engage in romantic interactions with Sims of any gender of appropriate age groups.

Not just in the game itself can homosexuality be found, also in the game trailers homosexuality is hidden, such as in the Diesel Stuff Pack and University Life Expansion Pack. The images in the Diesel Stuff Pack trailer change so rapidly, that is almost impossible to notice the homosexual themes, but it does influence the mind. In the LED The Sims: Play with life and do what thou wilt, we have slowed down the video so you can see what The Sims does not want you to see, but do get influenced by.

The University Life Expansion Pack has an announcement trailer and a launch trailer. It is pretty easy to discover the same-sex themes in there, but we do recommend watching the LED video, where we clearly reveal these themes.
Besides homosexuality, these trailers also greatly promote sexuality, sex before marriage and lawlessness.

Ghosts, spirits and demons
Another aspect that can be found in all the versions of the game is ghosts or spirits. EA Games released an update for the Sims 4 last year, by which players can now create ghosts in the game and play with them as with any other Sim. These ghosts can get a job, buy a house and live life as if they never died. Besides that, they can have relationships with either ghosts or Sims and do pretty much everything with them. That includes kissing, WooHoo (sex) and even have a baby together. A normal Sim that gets pregnant of a ghost will give birth to a ghost baby.

The Bible warns of of necromancy, which is talking to the dead:

“When thou art come into the land which the Lord thy God giveth thee, thou shalt not learn to do after the abominations of those nations. There shall not be found among you any one that maketh his son or his daughter to pass through the fire, or that useth divination, or an observer of times, or an enchanter, or a witch. Or a charmer, or a consulter with familiar spirits, or a wizard, or a necromancer. For all that do these things are an abomination unto the Lord: and because of these abominations the Lord thy God doth drive them out from before thee.” Deuteronomy 18:9-12

Possessing objects is also something you can do with your ghost with The Sims 4 update. Once a ghost does that, the object, such as a shower or a mirror, floats in the air. In the Sims 2 ghosts could move objects, such as a microwave door, and put it on top of the microwave. None of these things were even possible in The Sims 1. Ghosts would haunt your house, but thats it. There was no contact with living Sims and no possession of objects. It seems like EA Games and Maxis are going downhill with this one, making things worse with every new version. Will this make people believe there are ghosts out there (only we know they are demons or fallen angels, see 1 Samuel 28:13-14), but make them think that they are our little friends? We can even have sex with them. Is Satan preparing us for something greater through such an ‘innocent’ game?

Midnight Hollow: Crowly’s town
This is just a snippet of the ‘do what thou wilt’ philosophy in The Sims. Satanist Aleister Crowly might as well have been the designer for the expansion pack for The Sims 3 called Midnight Hollow, would he still be alive. The official description on The Sims website reads: “Explore a landscape where all you’re really required to be is yourself. Under the subdued sky of Midnight Hollow, it’s the residents who really shine. What life will you make in a town where creativity and individuality are at the center of it all?”

“But he who looks into the perfect law of liberty and continues in it, and is not a forgetful hearer but a doer of the work, this one will be blessed in what he does.” James 1:25

The Bible is clear: God’s commandments are there to make us happy. We will be blessed when we keep them. King David even longed for God’s law and delighted in it. The Sims 3 Midnight Hollow seems to promote the exact opposite: break the rules and then you will be happy. Do whatever you want to do. There are no limits.

For example. In the town there are a few families or single Sims that are a spoof of real people. You have the Yates family, which is a spoof of the Bates family in the thriller book and movie series Psycho.

In Psycho Norman Bates owns a motel where guests rarely stay over. His mother murders the few guests that do stay and the private detective. At the end of the movie a forensic psychiatrist discovers that Norman killed his mother and her new boyfriend because of jealousy. Consumed with guilt, Norman ‘erased’ the crime by bringing his mother back to life in his mind as an alternate person while in a psycho. He attacked all those people dressed in his mother’s clothes and wearing a wig. Norman Bates and his mother are in The Sims Midnight Hollow Expansion Pack.
Second there is Katarina Stewart, a spoof of Katherine Stewart, a well known actress in the Twilight movies.

The Twilight saga in short is about vampires and werwolves and Isabella Swan, the character of Stewart, who falls in love with vampire Edward Cullen.

The definition of a vampire according to the Miriam Webster dictionary is:
1. the reanimated body of a dead person believed to come from the grave at night and suck the blood of persons asleep
2. one who lives by preying on others

Then the last notable character: Lucien Hyde, aka Marilyn Manson: a worldwide famous rockstar known for many anti-Christian statements.

Here’s two: “I Wanted to be the loudest, most persistent alarm clock I could be, because there didn’t seem like any other way to snap society out of its Christianity.”

A Satanist and priest at the Church of Satan, who cuts himself while he preaches and his fans follow his example, someone who drinks blood and urine and wants to do away with Christianity through his music. This guy is in The Sims.

This is just the tip of the iceberg that we have discussed here. The Sims series contain zombies, vampires, witches, new age music, aliens, men who get kidnapped by aliens and get pregnant by them, one night stands, cheating on your spouse, the promotion of alcohol and a party lifestyle as the source of happiness, magic, contact with future descendants, mermaids, mummies (the dead come back to life) and so much more. For more information about video games, we’ve created two documentaries solely on games, which are Controller level 1: Simulated Spirituality and Controller level 2: Hidden Characters.

“For we do not wrestle against flesh and blood, but against principalities, against powers, against the rulers of the darkness of this age, against spiritual hosts of wickedness in the heavenly places. Therefore take up the whole armor of God, that you may be able to withstand in the evil day, and having done all, to stand.” Ephesians 6:12-13