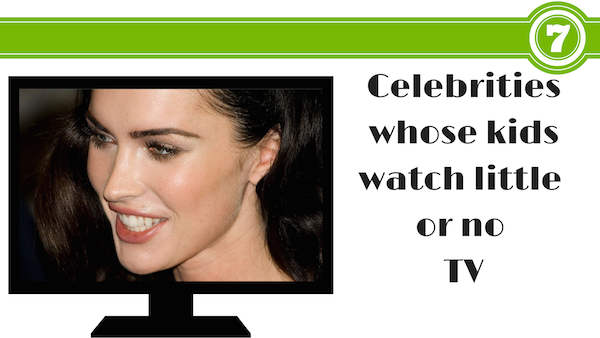 7 Celebrities Whose Children Watch Little or No TV

7 Celebrities Whose Children Watch Little or No TV

While she does let her kids watch tv, she only lets them do so in a foreign language, Spanish or French. Along with his wife Felicity, are not totally agains TV watching, but they definitely want to limit the tube time.  They ask their kids to go read a book before watching anything.  What does he think about Television?  Well here it is straight from the horses mouth:

“There is wonderful, educational stuff on video.  Our issue is that television itself is too powerful.  That image is too overwhelming for a little kid.  I think the longer we let their minds cook, the better.”

Even more outspoken than William H Macy about her child’s involvement with television, here is what she has to say.

Check out here interview with Larry King below.

Why doesn’t she let her kids watch TV?  Well she wrote a whole blog of reasons.  Another reason her opinions might hold weight?  She has a Ph. D. in Neuroscience.

Her kid didn’t even know who Nemo was.  How many of us can say that?  See her David Letterman interview below. By Gregg Rizzo (Image e-mailed to uploader by the author.) [CC-BY-SA-3.0], via Wikimedia Commons

While not television is not completely absent from the lives of his children, it’s certainly limited to weekends.  And not just the TV, but internet as well.

This mother of two might allow the occasional movie, but no TV for her kids.

Why limiting your child’s television is a good idea

So why is it a good idea to limit or eliminate the TV time for your kids?  Our latest documentary endorsed by the Parents Television Council explains why.  See some clips.


Get it on DVD