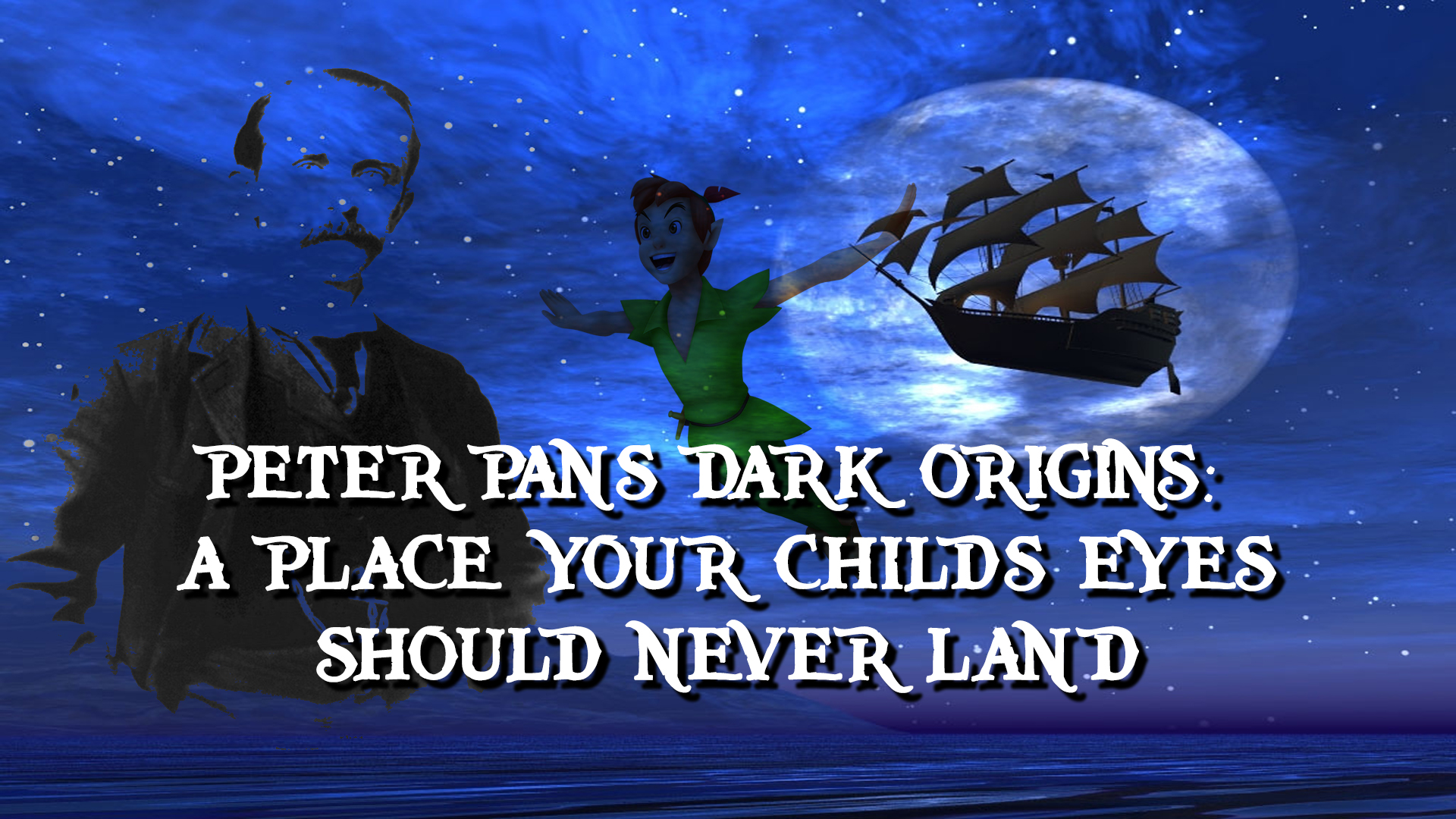 It’s no shocker that the timeless tale of Peter Pan has questionable content that kids just shouldn’t be exposed to.  Moral messages such as “never grow up…do whatever you want”, “it’s okay to kill”, and “pediphillia”.  After all, Peter Pan was named after the greek god of sexual deviance, rape, and torture.  We’ll get to that in just a moment.   What you might not be aware of though is just how dark the origin of the story truly is.  You might want to rethink exposing any young impressionable mind to its rebellious influence. 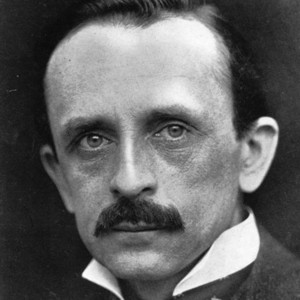 The story was originally written by James Matthew Barrie born in 1860.  He lost his thirteen year old brother in an ice skating accident… His mother never fully recovered mentally from the incident.  She would even dress J.M Barrie up as his brother to pretend the boy still lived.  Upon growing up, Barrie becomes a writer and in 1891 marries actress Mary Ansell, a marriage that was, in the words of his colleagues…never consummated.  Mary has an affair with another writer and the marriage is shattered by divorce.  Barrie, devastated by the ordeal, is walking his dog in a nearby park and meets the Davies family.  The 1994 film titled “Finding Neverland” with Johnny Depp is based on J.M Barries experience meeting the Davies… A glamorized Hollywood version of course.  Nevertheless, Barrie quickly takes to the boys, George, Jack, and baby Peter and becomes a regular visitor at the their household, earning him the title of “uncle Jim”.  Barrie uses the Davies family as subjects for his writings and is especially inspired by the young baby Peter, naming the character Peter Pan after him. 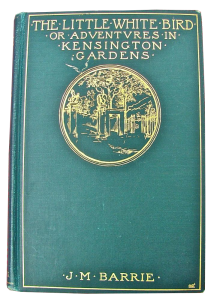 Peter Pan made his first official appearance in the book titled “The Little White Bird”, Barrie’s thinly veiled novel about George Llewelyn Davies that, today, with our sensitivity to sexual predators, has a creepy tone. In the book, a boy named David is befriended by the narrator, who pretends to have a son of his own who died. He uses this lie to create empathy with David’s parents. The narrator is particularly excited that David’s mother, Mary, has been duped, which allows him to “take [David] utterly from her and make him mine.” Within the novel, the narrator invents a story about a magical boy named Peter Pan who never grows old, and who lives in Kensington Gardens.  The character was then developed into its own book where the story has Peter Pan killing anyone who chooses to grow up.

Now why J.M Barrie created the character after the sexually twisted Greek god Pan is disturbing in and of itself.  Even more ironic is that in Barrie’s personal life accusations of foul play began to surface.  Claims that the relationship Barrie built with the Davies boys (especially Michael) was of an inappropriate manner.  One such letter was written to Michael on his 8th birthday.

“I wish I could be with you and your candles. You can look on me as one of your candles, the one that burns badly — the greasy one that is bent in the middle. But still, hurray, I am Michael’s candle. I wish I could see you putting on the redskin’s clothes for the first time… Dear Michael, I am very fond of you, but don’t tell anybody.” 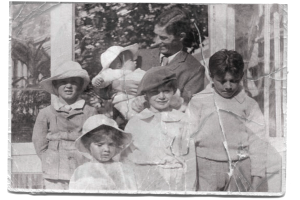 In an autobiography by Piers Dudgeon, Neverland: J.M. Barrie, the Du Mauriers, and the Dark Side of ‘Peter Pan’, Dudgeon unravels some pretty incriminating evidence that there was more to Barrie’s attachment to the Davies children than simple protective friendship.  For example how Barrie became the boys’ guardian after their father and mother died.  Arthur Llewelyn Davies died from cancer of the jaw in 1907, and Sylvia died of lung cancer in 1910. Sylvia had left a handwritten document that said: “What I would like would be if Jenny would come to Mary and that the two together would be looking after the boys and the house.” (Mary was the boys’ nanny; Jenny was Mary’s sister.)  Barrie transcribed the will himself and sent it to the boys’ maternal grandmother, altering Jenny to Jimmy, so it appeared that Sylvia wished for him to become the boys’ guardian. Intentional, or just a really convenient accident?  Regardless, the children became his to care for.

Barrie was also known to have had friendships with other children, both before he met the Davies boys and after they had grown up. There has since been accusations that Barrie was a paedophile.  One source for the speculation is due to a scene in the novel “The Little White Bird”, in which the protagonist (who resembles Barrie) helps a small boy undress for bed, and at the boy’s request they sleep in the same bed.

Barrie suffered bereavements with the boys, losing the two to whom he was closest in their early twenties. George was killed in action in 1915, in World War I. Michael, with whom Barrie corresponded daily while at boarding school and university, drowned in 1921, with his friend and possible lover, Rupert Buxton, at a known danger spot at Sandford Lock near Oxford, one month short of his 21st birthday. Some years after Barrie’s death, Peter compiled his Morgue from family letters and papers, interpolated with his own informed comments on his family and their relationship with Barrie. Peter died by throwing himself in front of a train shortly after completing the work.

A statue of Peter Pan was placed in Kensington Gardens, erected secretly overnight for May Morning in 1912, and was supposed to be modelled upon old photographs of Michael dressed as the character. However, the sculptor, Sir George Frampton, used a different child as a model, leaving Barrie disappointed with the result. “It doesn’t show the devil in Peter”, he said.

Our modern idea of what the Devil looks like comes from depictions of Pan with his horns and goat feet.  According to the Greek myths, Pan is known for his sexual perversion.  This is perhaps the reason modern depictions of him in cartoons and movies show him corrupting the female characters.

Pan’s appearances in films such as chronicles of narnia are simply eerie.   When mr. Tumnus takes lucy back to his place and serves her a hallucinogenic drink , he begins to play the Pan pipes and she passes out.  When she wakes up… mr. Tumnus is crying.  Why, did he do something shameful that made him afterwards cry?

Disney‘s white washed version of  the character has toned down the sexual perversion but still retains the “devil-like” attributes.  Enticing the little girl to leave her parents authority and go to a place with no rules… “there is only one thing you have to do… leave home behind and you can never come back”.  It’s the same lie Lucifer told the angels in heaven… “don’t you want to go to a place where we don’t ever have to follow the rules… all you have to do is leave home behind and you can never ever come back?”  Pans friends, not accidentally called “the lost boys” inhabit an island called “Neverland”.  Where “selfishness” and “do what thou wilt” is the rule of the day.  Kind of sounds like a similar story where a bunch of “pirates” or “Lost Angels” inhabit this “island in space” called planet earth.

Michael Jackson’s was so obsessed with the story of Peter Pan that he ended up building his own private theme park in his backyard called “Neverland”.  Like Barrie, Jackson seems to have an infatuation with the sexual deviant god Pan, as depicted in the artwork hanging in his studio.  The painting has jackson surrounded with naked little boys and girls while holding the Pan pipes.  His ranch full of sculptures of little boys and girls.  The very flag and logo for the Neverland Ranch is of a little boy.  Coincidence?? You be the judge. 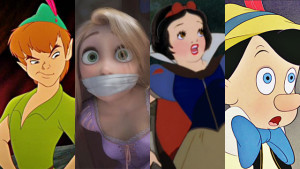 Needless to say, Disney is simply repackaging this dark tale.  In fact, many of the Disney classics are based off of extremely dark books.  Entertainment Tonight wrote an entire article outlining the origins of some of these beloved stories.

So don’t get lured into the darkness of Pan.  Don’t expose yourself to the rebellious spirit.  Instead, open your Bible and behold the greatest story ever told.  One of salvation from selfishness and eternal destruction.  A story that has the happiest ending of all, a returning home to the gift of eternal life.  Now that is something worth believing in.

And as always, remember to pray for people who make these movies.  We are all in need of a savior.  And like the apostle Peter tells us in 2 Peter 3:9,

“The Lord is not slack concerning his promise, as some men count slackness; but is longsuffering to us-ward, not willing that any should perish, but that all should come to repentance.”